So, lately, I've been trying to familiarize myself with the different Barbie head molds, or face sculpts.  Why?  I don't know, I guess there's just a tiny part of me that wants to become a sort of amateur expert on them, like, you know, actually earn the title of doll collector.  Stupid?  Maybe.  But it doesn't change the fact that I want to do it.

It started with the Lea/Kayla headmold, which I discovered when I was searching for Asian Barbies, and then I found one I couldn't resist and bought her.  (I still haven't completely clothed her yet--a top is coming in the mail for her soon.)  Upon seeing my Lea (I like the name "Lea" better than "Kayla," so that's what I call her), my brother said she didn't really look Asian, and . . . yeah . . . I guess I have to admit he's right.  But I still love her and think she's gorgeous, and she's begun my obsession with the Barbies with the Lea/Kayla headmold.  So much so, in fact, that I just . . . sort of . . . bought another one!  And this has to be it for a while.  I have to stop spending money on dolls, at least for little a bit!

But in the meantime, the doll I just bought is a nude Really Rosy Lea!  And I'm very excited, because she's rather rare.  Here's a picture of her, from the eBay seller: 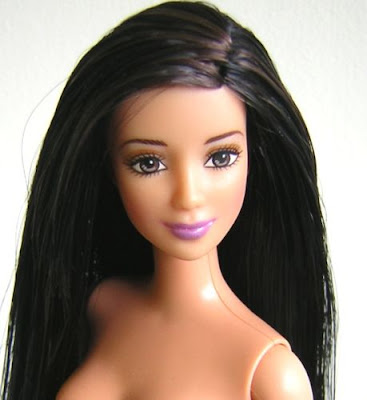 I think she's absolutely beautiful, and has a very sweet and kind look to her face.  I could live without the light purple lipstick, but oh well . . . Maybe I'll paint her lips myself (in a more, well, rosy color) if I can get up the guts to do something like that.  I'll also be needing to buy her a white Victorian-looking gown, because I've decided I want her to be the mother in my eventual Barbie Victorian scene, and I'll need . . . (shudder) . . . to rebody her.  That is, put her head on a Fashionistas articulated body.  I hope I don't screw that one up.
Anyway, that's my new Lea.  After that sculpt, my favorite is Teresa, and so I'm hoping to get a one (once I get some more money) to be Victorian Lea's sister.  (Eventually.  Eventually.)  Anyway, here are a couple of pictures of Teresas.  Note that they're all pretty much post-2000--we all know I'm not a huge fan of those earlier Barbies. 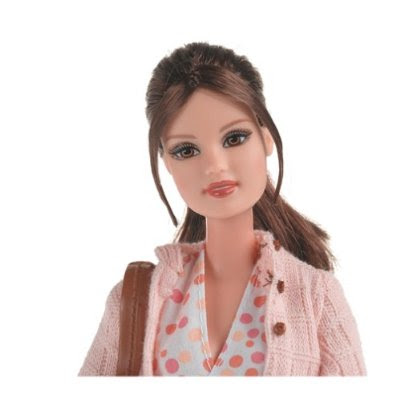 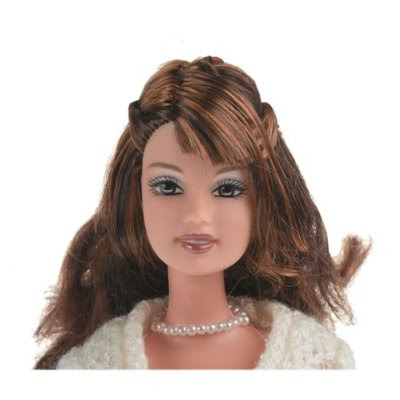 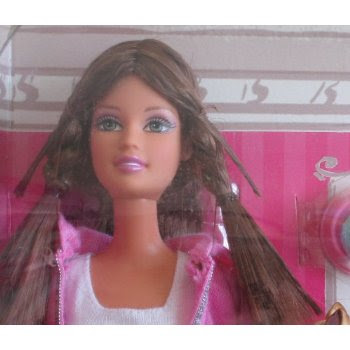 And I couldn't get a close-up of this last one, but her outfit is amazing! :) 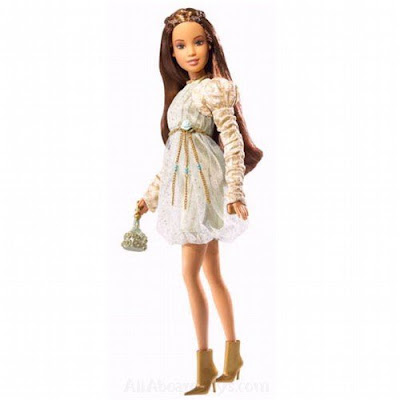 So, yes, Lea/Kayla and Teresa are in the lead, but I also like Ana/Lara quite a bit.  I still want this Barbie Basics one: 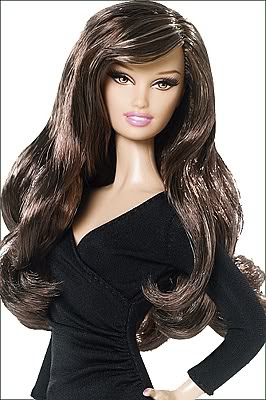 Ooh. :)
So those are my three favorite sculpts at the moment.  The Mackie sculpt is fine, and so is the Steffie, among others, but they don't seem as unique somehow.  The sculpt I really think is overdone (probably because Mattel uses it contantly) is the Superstar sculpt--like the Barbie they chose for Toy Story 3.
Just no Lea/Kayla if you ask me. :)
Posted by Jill at 8:55 PM